Toyota Ecozone is an environmental education initiative by Toyota Kirloskar Motors inside their 400 acre campus at Bidadi, Bangalore. Spread in 25 acres, the ecozone is being developed in the 25 acre derelict land in the campus. The Ecozone houses extensive theme gardens – Wetland Diversity, Climate Change, Underground Ecology, and Pollination Meadows surrounded by a restoration forest of native species. More than hundred local schools take part in Toyota’s green curriculum with its experiential learning.

The project featured below is one part of this large ecological restoration project, which is a timeline park. Walking through this Evolution Timeline Garden one absorbs striking images – the snowflake crystalline form of a single celled bacteria, the spiraling shell of an ammonite, the first appearance of earth’s flowering plants against the massive head of a T-Rex, and then in the final steps of the timeline, the rise of the Himalayas and the emergence of Hominids. These large artworks sprawl over thick granite pillars and soar across the path as steel silhouettes. Parallel to this walkway, the accompanying plants rise up through the garden beds as ancient echoes to the fossil record. Horsetails in a sheet of water, ferns, cycads, auracaria trees, palms and grasses rise up among the paintings and sculptures. The further one explores this walkway the more one is entangled with time, deep time. 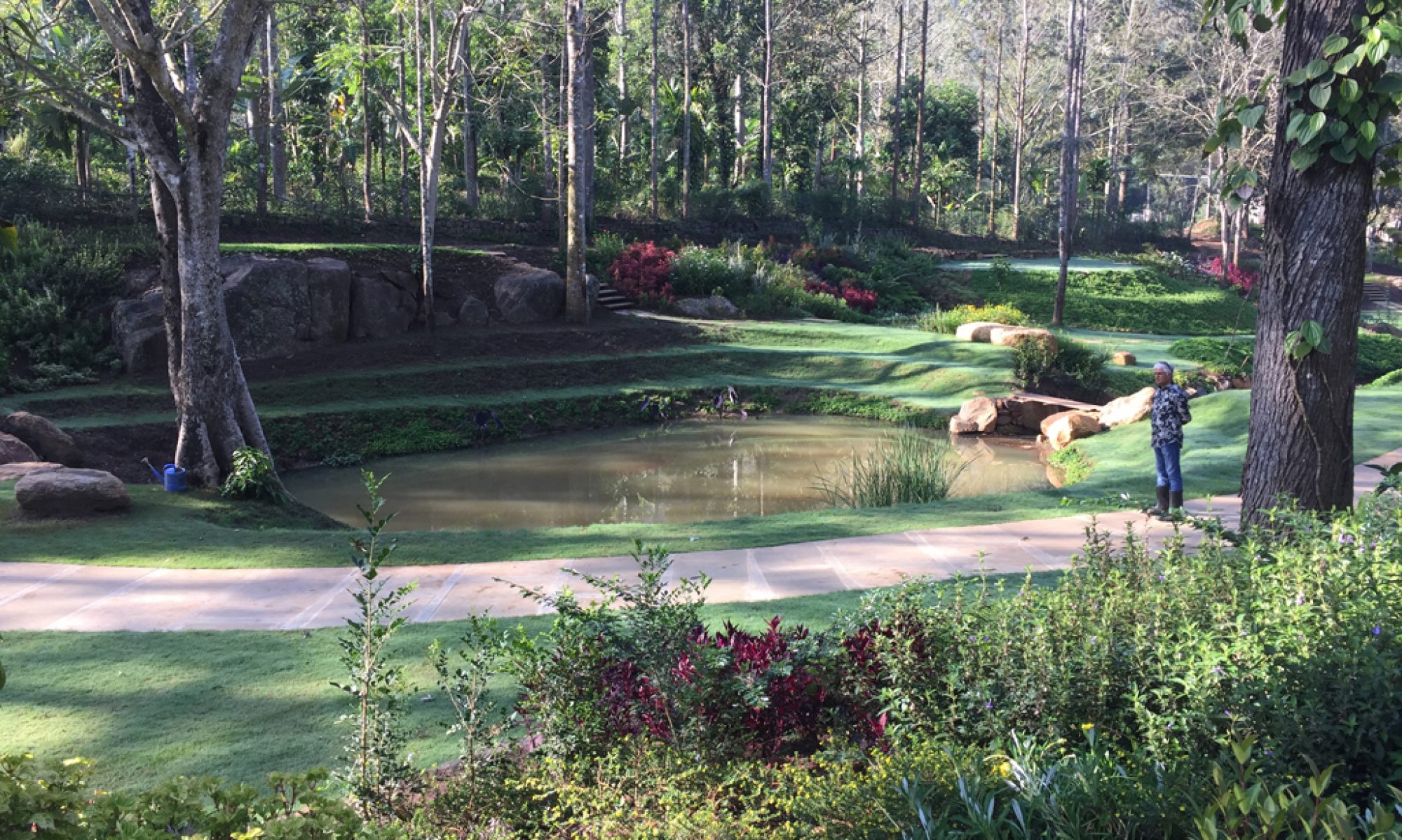 Teakayen Ecofarms is an eco-community layout in Sembarankulam, Kodai Hills. Exquisite ecological landscapes are designed with sculpted, artful landforms and experiential sequencing of spaces. The master plan was developed after careful ecological analysis of the sloping terrain. Water movement patterns are conserved and expertly integrated in an elaborate water management system which features many manmade lakes and reservoirs. The layout is planned and designed with the central theme of health and wellness.

Cluster planning has been a characteristic feature of Good Earth Malhar-Resonance. The emphasis has been on streets as friendly, social and interactive spaces. These streets, with chatty street corners and cluster parks, loop around the neighborhood and converge at the plaza and lead to a large playground. The open spaces are planned at different levels, in response to the natural topography of the land, and are linked to each other, though densely wooded pedestrian paths.

Set in a coconut and arecanut plantation, Good Earth Palmgrove is an eco-community layout that is based on ecological site planning and landscape, such that the entire layout enjoys large central open spaces that have various character catering to different age groups. Artful contouring of land and artistic installation of stone boulders make the campus a delightful experience. Indigenous flora adds colour, texture and aroma that would engage the visitor’s sensual experience of the campus.

Wipro Electronic City Campuses of EC3 and EC4 used to have a manicured garden with large lawns and exotic plants. However the management thought that the campus needs to be more ecofriendly and sustainable and started many initiatives to bring in eco-sensitive solutions in all aspects. Idea Design worked on the landscape and redesigned them to bring in elements of the Deccan ecosystem, in land formation, geology, hydrology and soil conservation. The retrofitted landscape was sculpted to create a fresh composition of indigenous plant communities annotated with ecological information as eco-art in local stone slabs. The central courtyard which was developed as a butterfly garden, now witnesses thousands of blue-tigers and other species nesting during the season. 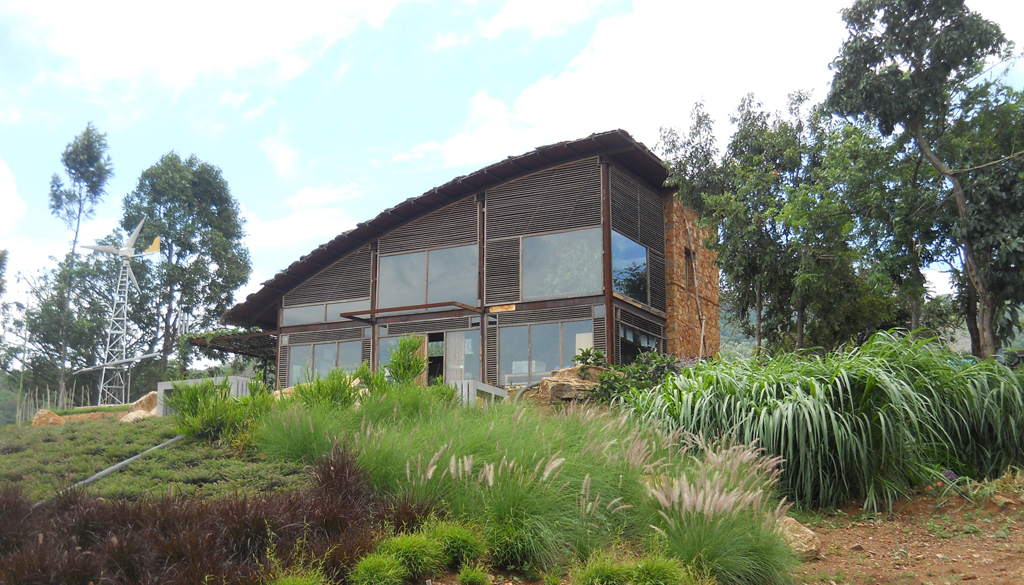 This environment friendly project office of Greenfield Shelters is perched on the exotic location on the eastern ghats overlooking the enchanting valley view. Built with reused steel frames, silver oak wood, bamboo, stone, mud and thatch it is a structure built to capture the nature surrounding it. A zero energy building which is off the grid, uses biogas based generator, wind power and solar power for all its requirements. The landscape incorporates big boulders of the site in its contours interspaced with a collage of mountain grass species and ground covers. The waterbody which penetrates the building and culminates in a vertical garden wall becomes the central feature. The Vertical garden itself is made of reused mineral water-bottles, stalked on metal frames and wrapped with geotextile. Organic vegetable garden, waterless toilets, mud-floor, bamboo floor, bamboo furniture and several other elements which exhibit strong commitment to ecological design principles.

Adyar wetland reserve and the Tholkappia Poonga Ecopark is an environmentally significant project in the city of Chennai. Idea Design worked on this project as landscape architecture and urban design consultants with Mr. Joss Brooks, renowned ecological restoration specialist of Pitchandikulam Forest Consultants, Auroville. A combined fresh-water / salt-water ecosystem has been revived to make it an ecologically rich and diverse system for migratory birds and estuarine ecosystems along with coastal vegetation being the significant link to tie them together.

Environmentally sensitive approach is given for the water and waste management. The sewage and waste water which flows from the city to this creek is treated using ecological planning techniques. Each aspect of the park demonstrates a strong commitment to the environment. An ecoforum is proposed where man can interact and interpret different ecosystems of the park. The park will also become a center for education and environmental awareness. Demonstration of working models of sustainable technologies for human habitation is another important feature of the park. Idea Design worked as part of the team who prepared the Ecological Restoration Master Plan. The Project was implemented by Pitchandikulam Forest Consulatnts and Idea Design provided detailed design services working together with ecologists from PFC.

Once a garbage and debris dumpsite, the park has recently recorded more than 100 species of birds, 100 different species of fish, 56 species of butterflies and 25 species of reptiles. The white-bellied sea eagle for the first time in these parts a month ago. Flamingos and painted stork have also returned here. This richness in biodiversity is in itself an indicator of the success of our restoration efforts.  A total of one-and-a-half lakh saplings of 400 indigenous species of plants have been planted in the restored area. Being a brackish water ecosystem, seven different varieties of mangroves and associates were planted on the site, and was able to successfully restore the estuarine wetland ecosystem.

Idea Design has worked on the Wipro Electronic City Campuses of EC3 and EC4 in ecologically retrofitting their campuses with indigenous landscape bringing in elements of Deccan ecosystem in these urban campuses. As a continuation, a detailed ecological regenerative landscape is proposed which will rejuvenate and enliven huge amount of recycled water from STPs of Wipro’s electronic city campuses, taking them through root zones, aeration, flow-forms through a large constructed wetland system, which also becomes a public space, to make the water more lively and making the campus more sustainable.